In the early 2000s, there was an acute shortage in access to both GPs and bulk-billing primary healthcare in the ACT. With the community frustrated by the lack of action to address their needs they came together to find a solution and began researching ways to provide affordable and accessible healthcare services for themselves. In 2009, the National Health Co-operative (formerly West Belconnen Health Co-operative) was set up which today provides GP services and allied healthcare to around 10 per cent of the ACT population. Read their story.

NHC evolved from a group of concerned residents seeking to address the chronic shortage of affordable, accessible and available GPs in their local community in Canberra. Reaching the point of opening the first medical centre’s doors was a slow and measured process.  The group’s journey, which took approximately five years from the initial public meeting to recruitment of the first GP, was necessary to bring a high level of rigour to everything the co-operative did. The health industry is a tightly regulated environment. This created a significant amount of pressure on the entrepreneurs to meet regulatory requirements and to demonstrate to the ACT Government that a community owned co-operative health centre was needed and would be a success.

In the early 2000s, there was an acute shortage and access to both GPs and bulk-billing GPs in the ACT. In North West Belconnen, the GP per capita ratio was nine times greater than the national average7. The low proportion of bulk-billing in the area made the problem worse given a 67 per cent unemployment rate, lower median incomes and high levels of social housing in comparison to the national average7.

“Doctors don’t have to bulk-bill in the ACT region because they can charge more due to the high demand and low supply. There is no incentive for clinics to take on more doctors because the supply will increase but demand remains the same.”

As a stop-gap, the community sought alternate means, including using hospital emergency departments for routine medical issues. This was exacerbated by the rapid closure of four medical centres in North West Belconnen, which increased routine and emergency presentation rates by 27 per cent in the three years prior to 2004. This increased usage placed pressure on the resources of the local hospitals, increasing waiting times by over an hour for patients7. 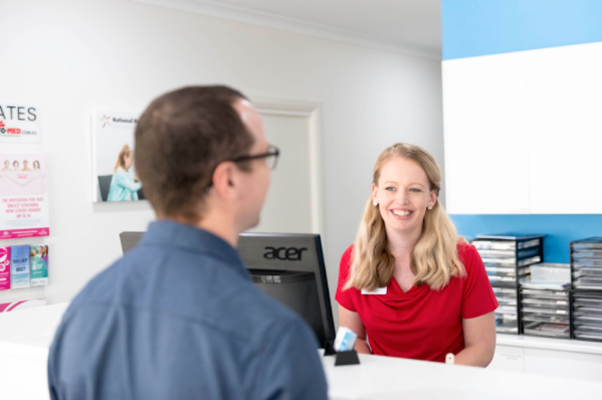 Fortuitously, the entrepreneurs learned of the Westgate Health Co-op just before the first community meeting. Westgate, a community owned co-operative, had proven to be a highly successful solution to the lack of bulk-billing health services in disadvantaged suburbs in Melbourne’s west19. Excited by the substantial growth and success of Westgate, the entrepreneurs used their own resources to bring the CEO of Westgate Tim Budge to the ACT to present the model at the first community meeting. Westgate provided an exciting option during a time when the community was scrambling for a solution.

“We had done plenty of research into different models and were really excited by the co-op model. Our driver wasn’t to start a co-op, we were thinking how do we deliver health outcomes for the community.”

The success of Westgate in a comparable situation gave the committee the confidence that the co-operative model was a serious solution to bring GPs and medical services to disadvantaged communities.  In November 2006 the West Belconnen Health Co-operative Ltd was born.

In early 2005, the committee prepared and distributed a household survey designed to quantify the community’s access to GPs and the community’s willingness to pay a membership to a bulk-billing co-operative owned medical centre. The survey responses confirmed the committee’s understanding of the problem. The responses also confirmed that patients were willing to pay an annual fee of $30 if their trips to a GP were always bulk-billed7.

Once the entrepreneurs demonstrated a co-operative health centre was feasible, they set about to develop the business plan which included:

Approximately two years passed between the initial draft feasibility study and business plan, which was finalised in 2008. In addition to its own expertise, the committee drew on the expertise of a number of key experts and stakeholders. These were instrumental in bringing rigour, knowledge of co-operatives and finances to move from the initial idea through to opening its doors in 2010. These included pro-bono consultants David Bailey and Anne Davis of Professional Management Solutions who contributed financial feasibility assessments and advice. The ACT Government provided $15k of funding support through ACT Health to prepare the feasibility study and business plan.

David Bailey in particular was perhaps the most critical of all stakeholders. He brought credibility to the project given his experience in establishing medical centres and understanding the regulatory and compliance requirements of running a centre. He gave stakeholders confidence that the co-operative had the right expertise to succeed and this helped to secure funding and recruit GPs. He also provided insights into the development of the feasibility and business plans ensuring they had the depth and accuracy of information. This provided stakeholders with confidence in the financial viability of the
co-operative.

“It’s fair to say without David we wouldn’t have been able to convince anyone they could pull it off. We could present well as a community group, but without David we couldn’t get that higher level of stakeholder confidence. He added a lot of credibility and subject matter expertise. I can’t stress enough how important it was to have someone with so much expertise at that early stage.” 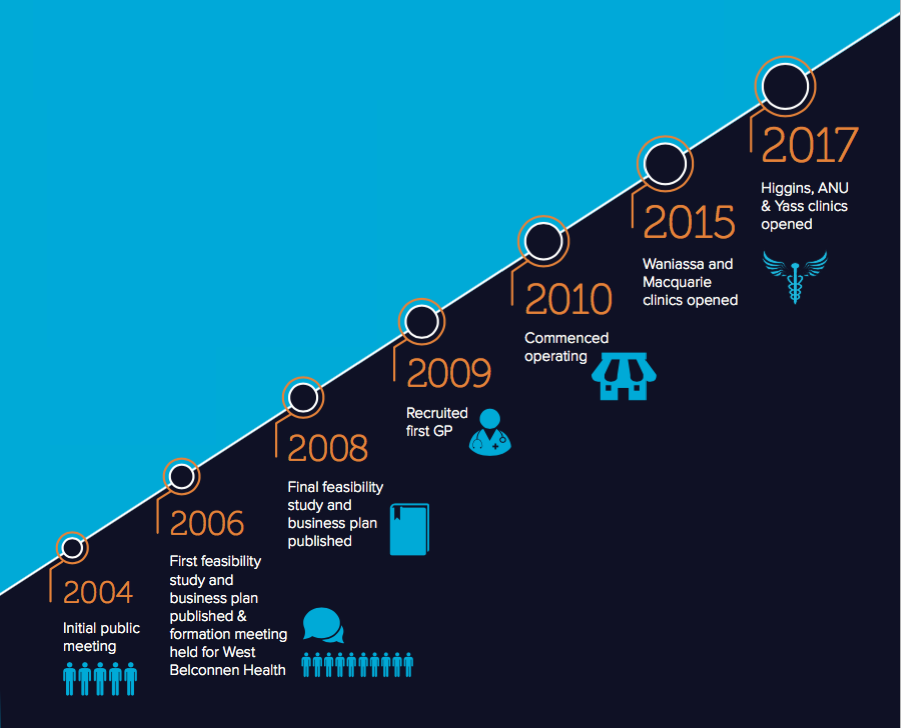 In 2009, the co-operative – now known as NHC – recruited its first GP and was able to open the doors on its very first centre in 2010 with 100 members. Of the approximately $600,000 required to open the centre, the Federal and ACT Governments provided $200,000 each.  Capital Chemist – the business of Co-Founder and Chairman Brian Firth – provided the remaining $200,000 as an in-faith loan.

“My business partners and I made the decision to support the establishment of the NHC to address the need we were seeing every day in our role as local pharmacists. I am a firm believer of supporting the local community that has supported my business.”

The process of fundraising took a considerable time. The Committee presented the feasibility study and business plan to corporates, the Federal and ACT Governments, and community groups to seek their assistance. This was a slow process requiring trust to be built over time and education to help them understand the co-operative model. The ACT Government were eager for a solution to the problem, however were hesitant in funding a start-up without a track record. Only after significant work to build credibility with the Government was any funding forthcoming.

A landlord assisted NHC by keeping a prospective building for the centre available for five years until they were able to recruit the first GP and begin fitting out the centre.

Additional clinics have been opened using alternative sources of funding,  The Chisholm clinic, the fifth such clinic opened, was part funded by the Bendigo Community Bank who provided $100,000 in conjunction with $100,000 from the NHC. The ACT Government matched these commitments with $200,000.

Although the majority of expansion capital has come through debt and retained earnings, a $1.5 million dollar investment from the Service One Alliance Bank in 2015 helped the NHC establish four additional clinics including the first clinic outside the ACT, in Yass, NSW.

Now with 10 clinics in the ACT and NSW, and conversations for further interstate expansion ongoing, NHC is closely watching the possibility of Federal Government legislation changes that would allow cooperatives to raise non-member investment equity without impacting their charitable status. If this legislation is passed, it would help the NHC significantly grow its rate of expansion into the future.

The NHC is guided by its philosophy that as a non-distributing co-operative, all revenue is reinvested back into its operations to provide additional services to its members and for the continued growth of the business.

This model contrasts with the ‘corporate medicine’ model that has emerged in recent years which, like other corporate businesses, is run to generate a profit for return to shareholders.

The NHC works on the principle that in areas critical to the success of a community, such as healthcare, education and child and aged care delivery, a business model that directs its revenue to activities to benefit its members has the ability to not only uplift those members, but also effect significant social and economic change for the benefit of the entire community.

Today, NHC has grown to over 35,500 registered patients who receive 200,000 consultations annually.  This represents approximately 10 per cent of the ACTs population – making NHC the largest provider of bulk-billing in the Territory1.  NHC is supported by 100 medical and administrative staff across ten full-time medical centres. Each of the clinic’s success is a testament to the vision of the founding co-operative entrepreneurs.

NHC has always been a grassroots initiative maintaining strong links with the community, from the initial meeting, to surveying the community through, to registration and operating NHC today.

During the five years to establish NHC, maintaining engagement with the community and managing their expectations was not always easy, especially during periods when the project slowed for different reasons.  Members of the committee would often be stopped in the street and asked how the co-operative was progressing. Five years can seem like a long time for a community in need of more affordable and accessible health services. While time consuming, the extensive community engagement undertaken by NHC helped to ensure NHC met the needs of the community.

NHC is governed by its Board, which currently consists of seven directors and comprises the three original entrepreneurs.  NHC had to be incredibly strict about having the right governance structure in place that meets legal requirements and has financial integrity. This has been vital in ensuring NHC remains responsive to member need and is not captured by a minority.

The day-to-day management of NHC is overseen by the Managing director and the administrative team, with the Medical Director responsible for the clinical operations. The Management team work closely with key government, business and community partners. Attracting and retaining GPs with technical expertise and alignment to its purpose has been critical in growing the capabilities of NHC and managing the transition into a professional business organisation without losing the focus on community.

In addition to the annual general meeting, members are engaged through their GPs in co-developing the care they receive, the type and level of service that best meets their needs and monitoring the impact of programs over time.

“The difficulty arises because the idea of the co-operative was a vehicle for the community’s frustrations with the health system and lack of GPs. During those tough times the steering committee had to always remember that the community was the reason they started down the path. The lesson is to be available and put yourself out there.”